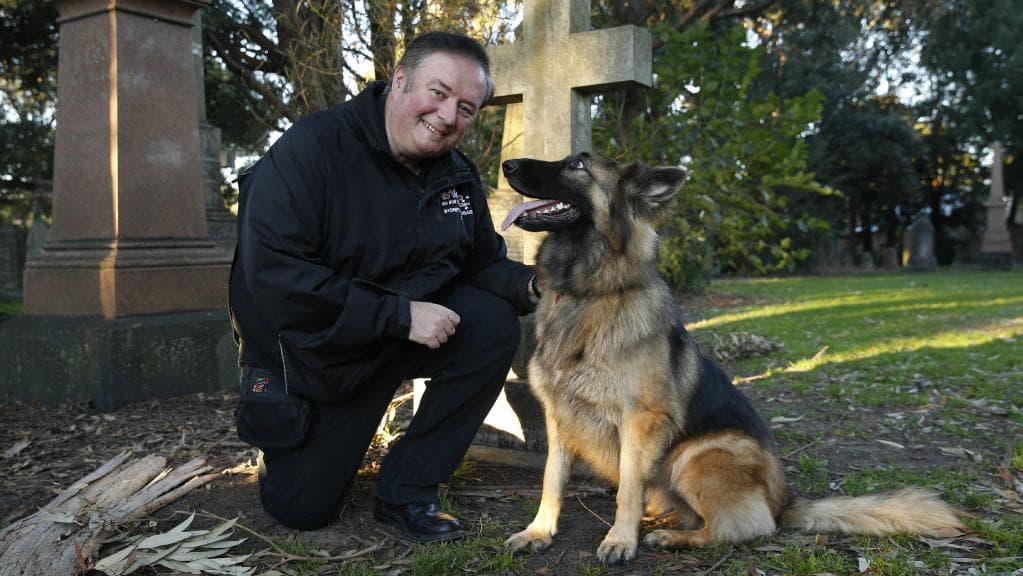 Hera, the Ghost Guard dog, and her human - photo courtesy of The North Shore Times .
Hera is a Long Stock Coat German Shepherd, who accompanies the ghost tours, and acts as our "radar" in the dark...

She is named after the wife of the Chief of the Greek Gods, Zeus.  As a Long Stock Coat German shepherd, she needs regular care to be at her best.   She is always impeccably groomed before she meets her guests..

If you were ever going to meet a "Radar O'Reilly" of the dog world - she would be it! Hera is incredibly smart.  She is a loving, happy , playful, amiable and friendly dog. With the very rare exception, of when someone deliberately acts in a threatening or unpleasant manner. Then, the protective instincts that German Shepherds are world famous for, kick in. She is also very well trained - so she can be relied on to do what she is asked, when she is asked, by her human.

Her incredibly keen night vision ( on par with a cat) , sense of hearing which is 500 times better than human hearing, and a nose keen enough to know when a barbecue has been lit three suburbs away, ( 5000x better than human)  helps keep all of our ghost tour participants safe.

Hera the ghost guard dog's 2020 halloween costume! has been chosen

Congratulations  to Beryl Stephens of Narremburn, who was one of the 37,849 people who voted this year through our website and social media, for Hera the Ghost Guard dog's annual Halloween costume.  The costume, as you can see, was Little Miss Red Riding Hood! We will be in touch soon to organise your private ghost tour party, and dinner at one of Cammeray's best restaurants!

This choice, the Mexican Bandit, was the runner up costume. We are seriously thinking about putting it on Hera the Ghost Guard dog's frequent companion, Tad. As a very laid back male German Shepherd - it absolutely fits his personality!

Below were the choices voted on this year - click on the photo to expand it!